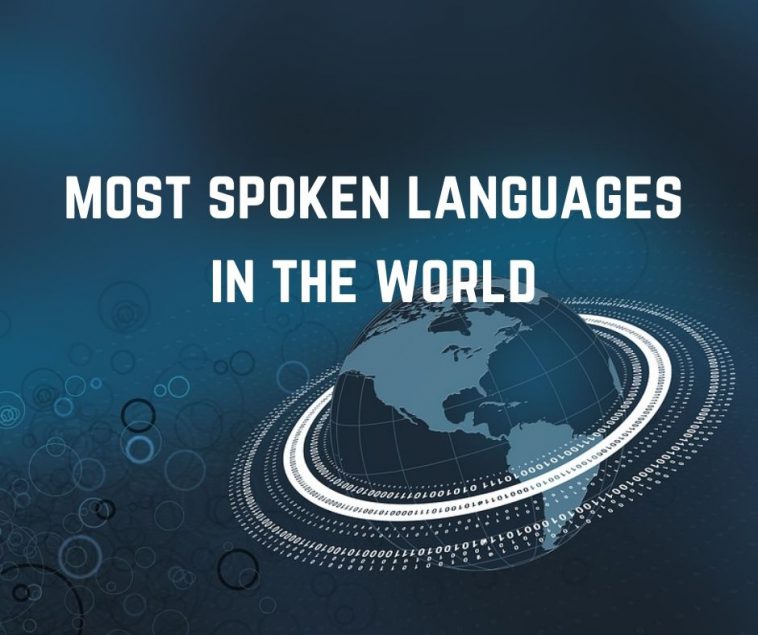 There are around 6500 languages being spoken the world of around 7.5 billion people and every single languages makes this planet the more diverse it already is. Some languages are spoken by a wider demography than others. For example, Busuu language is spoken by only eight people but that does not make it any lesser important.

Here, we have compiled the list of top 12 languages spoken in the world as per the number of people speaking them –

English language is spoken the most by around 1130 million native speakers. It is the official language of the sky i.e. all pilots must speak in English and identify themselves as English. Shakespeare is considered as the greatest English dramatist of time and he is credited to have added 1700 words to the English language.

615 million people speak native Hindi which makes it the third most spoke language in the world. It is one of the official languages of India and is spoken in countries such as Nepal, Fiji, Mauritius and Guyana. The language is influenced by Sanskrit and named after ‘hind’ meaning ‘Land of the Indus river’.

Spanish is one of the most spoken languages in the world as around 534 million people in 22 countries over four continents speak it. in those countries, it is one among the official languages. Around 10% of the world speaks Spanish and is considered easiest foreign language to learn.

French is spoken by around 280 million people in the world with it contributing around 45% of the English language words. It is spoken in different parts of the world and in parts of Canada as well as to Senegal and Madagascar.

Arabic is the sixth most spoken language in the world with 295 million native speakers. It is one language that is written from right to left. It has heavily influenced European languages such as Spanish and Portuguese. It is a unique language as it has 11 words for love expressing different stages.

Bengali is hardly spoken in the west but still it is the fifth most used writing system in the world with around 265 million speakers globally. It is mostly spoken in India and Bangladesh and is considered the second most beautiful language in the world after French. The Bengali alphabet is unique as every consonant has a vowel sound built in it.

Russian is one amongst the most spread out languages in the world with 155 million native speakers and is the eighth most spoken language in the world. The grammar is known for being a little tricky as it has 200,000 words.

Portuguese is considered to be one of the oldest language is connected in the region of Medieval Galicia (which was partly in the north of Portugal and partly in the northwest of Spain).  Only 5% of the 215 million native speakers live in Portugal. It is the official language of Brazil and has official status in Angola, Mozambique, Guinea-Bissau, East Timor, Equatorial Guinea, Macau, Cape Verde, and São Tomé and Príncipe.

Until recently, the letters “k”, “w“ and “y” were not part of the Portuguese alphabet. In 2009, a new agreement was signed to standardise spelling forms across different variations.

It is the official language of Malaysia and Indonesia and is considered as the most polite languages in the world. It has easy pronunciations and is even easier to learn.

It is the official language of Pakistan and is very close to Hindi language. Hindi and Urdu speakers can converse easily as the dialect becomes similar. It has amazing words for love and romance.

It is considered as the language of the writers and thinkers and is spoken by over 100 million people worldwide. It is the most spoken language in the European Union and is official language of Germany, Austria, Liechtenstein, Switzerland and Luxembourg.

Languages in the worldMost Spoken Languages