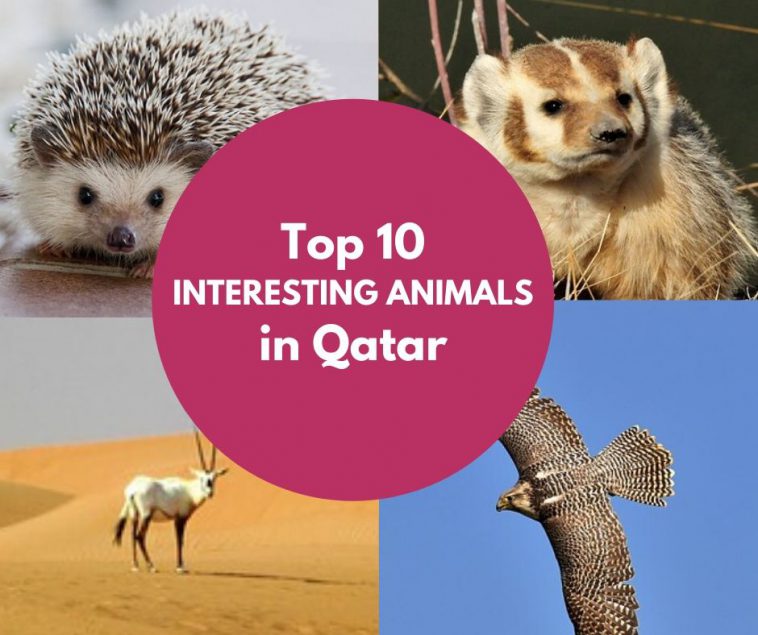 However, Qatar is also one of the places, which do not allow more number of animal species to exist. There are completely less, where they could find their permanent house or live in the warm winter months in Qatar. Most of these are very rare and nervous. So I will introduce you some of the interesting and rare species which shares this country with us.

This fantasy of Qatar is all about Arabian Oryx. It is one of the species of deer which can be found in Africa is proud to be a national animal of Qatar. The Oryx through its straight horns and triangular pretty shape on top of its nose have gone far away from the battle to protect itself from death. And introduce itself into the wild in the 1980s. The species is currently just vulnerable that is the best performance after near to death. However, it will need time to until not at risk in any way.

There are six different types of falcons: the Amur Falcon, Sooty Falcon, Lanner Falcon, Saker Falcon, Peregrine Falcon and the Barbary Falcon. Falcon is one of the important animals in Qatar. The falcon is used as hunting and chasing tool due to its sharp eyesight. It is associated as friendly and costliest animal. It is a famous pet. Hence, it should be cared properly and intensive training.

This small pretty also lives in the desert. It made this list, since it is too charming.

However, simply being very pretty like Common Hedgehog means that you may know, it is the legend of desert. Desert Hedgehog needed to adjust his eating habits, and should adjust with the things, which are available in the desert. Therefore, when it does not find anything to eat such as insects, fruits, etc. It eats a scorpion.

Discussing about one of the tough guys, spiny-tailed agama. I just want to share about the animal with you. There are some of the interesting facts about this lizard. As it warms up or else cools down, when it is in cool temperature it changes to dark grey colour, in the same way when it gets warm up it changes to light yellow or sand colour. It can keep water for a long period, shield itself by waving its solid spiny tail at its predators and spiny-tailed agama is vegetarian, except for the younger ones, who may have an insect or two.

The Jewel Beetle is not only an insect that may be creeping up on you. It is lovely with its diamond-like wings and feeds on the nectar. This insect does not fit into the luxurious and shiny aspects of life that Qatar offers.

The Pharaoh Eagle Owl was really found nesting on one of the pyramids in Egypt and this manner known as the Pharaoh Eagle Owl. In any case, the owl will move its winters in Qatar, this is somewhat “down to earth”, as it is nesting on the ground and in cliffs or rocks, it has lifelong monogamous relationships, and the parents take care of the babies. Have you realized that a group of owls is known as a Parliament?

The Arabian Horned Viper also lives in the desert and it is dynamic during the night. Horned vipers will hide well, with the goal that its main indications being around are the winding tracks it leaves. What makes horned vipers so interesting? The Horned Viper’s venom is deadly, and the horned vipers kill birds within 60-90 seconds. Who has viewed a snake with horns previously?

The Ruppell’s Fox is quite rare in Qatar yet this is one of the nation’s best survivors. The Ruppell’s Fox goes through the day in caverns and gets dynamic around at night. Everything about it is adjusted to live in the desert: its ears are longer than its head to help it cool off, and it has a delicate hide on the pile of the paws to protect itself from the warmth of the sand, but to show signs of better grasp for strolling. The main predators it has in Qatar are Eagles and the Eagle Owl. Another cool thing is that we realize the sound it makes when it barks like a dog.

The famous Honey Badger will attack almost all animals. In Africa, it has battled lions and other significantly larger animals, however in the southwest of Qatar it won’t need to attack lions. For what reason is it so brave? The response lies in its advantage in being tireless in a battle. Not exclusively will it battle anything, the Honey Badger will be able to eat anything. Doesn’t sound extremely fearless to you? The Honey Badger may support honey, insects and little animals, yet it will eat a snake, including the very harmful and huge ones. It is one of the smart species, which can use tools. The Honey Badger has used tools, for example, wooden sticks and rocks in battle, yet to enable him to get escape.

In conclusion, comes my personal top choice, the Dugong. It is the main genuine vegetarian lover animal of the ocean. That is why it was called ocean cow, however I chose toward the translation of its Tagalog name Dugong, meaning “Woman of the Sea”. Old stories say that mariners confused Dugongs with mermaids and went gaga for them when adrift for quite a long time and months. Through their solid way of life, the moderate swimmers can live to 70 years and more. Have you thought about this magical animal living in the Arabian Gulf?

There are more interesting animals living in this nation than you may have thought. Qatar’s animals are only somewhat more secretive and nervous, which can make their presence more attractive.