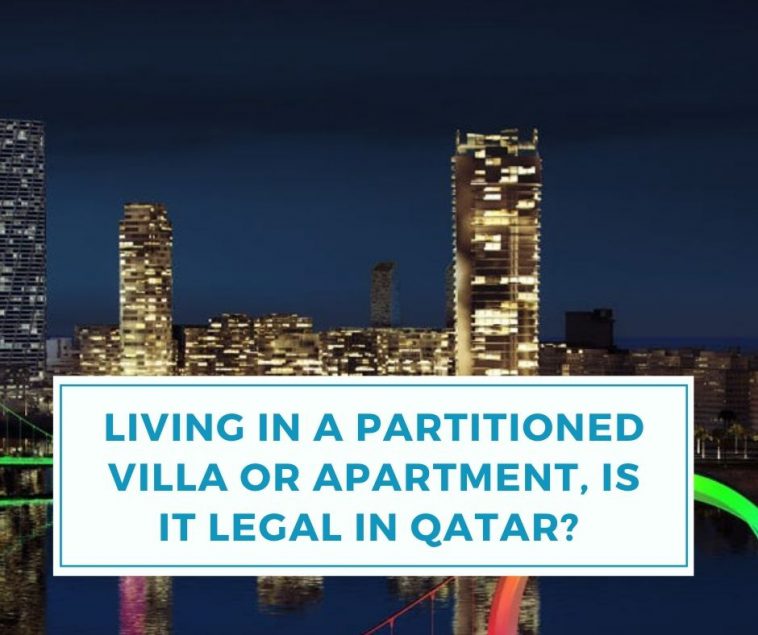 It is illegal to partitions in Qatar as per the Ministry of Municipality and Environment, who inform that legal action will be taken against anyone who tries to adjust their villas without permission of the Ministry and without getting the required approval to keep away from various health and security violations including the chance of fire episodes, and unsafe building methods, along with too much energy consumption.

What do we mean by partitioned villas? Why are they not allowed in Qatar? These are only some of the questions we will answer in this Guide.

What is a partitioned villa?

Peoples/companies regularly purchase or rent out villas or buildings and the partition them so they can make smaller residences with these (maybe rent them out to people who are looking for inexpensive and affordable housing, without getting earlier permission from the relevant authorities like the MME and the Doha Municipality.

Is it easy to get approval from the Municipality to partition or modify a villa?

No, it’s not easy to get approval to partition or modify a villa. First you need to present a complete design of the proposed modifications or changes that is made by an engineering consultancy. The entire process from submitting the design to the approval is costly and furthermore time-consuming.

This is one of the main reasons why peoples/companies partition villas or apartments illegally, because if an illegal partition costs, say QR 10,000, one that is approved by the Doha Municipality may cost double that amount.

Unfortunately, yes. Even though the government has restricted partitioned villas, they are still available and are even advertised discreetly. Numerous people actually decide on a partitioned villa or apartment, even that there is a risk of getting captured and fined, because they are less expensive than a normal villa, an apartment where only one family can live.

Actually, most of the people who live in partitioned villas have a place with a low-salary background or are single workers.As per by Qatar Peninsula:

Is there a law for this?

The construction of buildings, an institutions of works, extension, heightening, support, demolition or maintenance of the building, an adjustment in landmarks of property through excavations, filling or levelling, or the undertaking of any works, for example the connection of services to buildings will not be undertaken without first obtaining the permit from the competent municipality.

The licensee will not paint the facades of buildings and the outside walls of buildings in colours other than those specified by the competent municipality.

No contractors or others will execute any of the works specified in the past paragraphs unless the owner of the property has obtained the necessary license from the competent municipality.

An exemption to the above will be easy maintenance works as determined by a resolution of the Ministry of Municipality and Urban Planning.

Without prejudice to any greater penalty gave in some other law:

What is the penalty as indicated by the law for partitioning a villa or an apartment without approval?

Contractors and others (subcontractors or engineers) must do the construction of a house or building after making sure that plans and designs are affirmed by the municipality. (Qatar Gulf News)

If they don’t get the approval and still carry on with the partitioning, the altered law recommends a fine of QR 250 to QR 500 per square meter of illegally partitioned area in a piece of property. What’s more, the alterations should be removed after paying the fine. If a wall, permanent or makeshift, has been raised, to make an illegal partition, the penalty per square meter will be between QR 200 and QR 400.

To complete maintenance work, repair, renovation, partitioning, extension, demolition, digging, or levelling of excavated areas in respect of a housing unit also, the region’s written permission is required. Temporary workers and designers, including consultancies, overlooking the above condition will attract a fine of between QR 10,000 and QR 100,000, as indicated by the changed Law Number 8 of 2014.

What is the Municipality doing to stop these illegal partitions?

The Municipality has taken down against illegally partitioned villas in the last couple of years, and thus there aren’t as many as there used to be. Truth be told, with partitioned villas not in the market as in the past, market sources believe there is a deficiency of housing that is reasonable for the low-income expat families and the single workers.

The Municipality has become more vigilant and has inspectors who are constantly keeping their eyes on construction materials that are transported from one place to another, if they think even a bit of suspicious behaviour and will zero in on the illegal construction or change. Therefore, several partitioned villas and apartments have been honed in on, eliminated and penalties passed out.

If any contracting and engineering consultancy firm is caught illegally partitioning villas, it will be blacklisted by the Doha Municipality and its transactions will be frozen until the firm rectifies its status, after which its name will be removed from the blacklist. (Construction Week)

New residential buildings with units that are affordable to rent have also been manufactured. This, complemented with better road connectivity, is also having an impact in getting rid of partitioned villas or apartments that are used to rent.