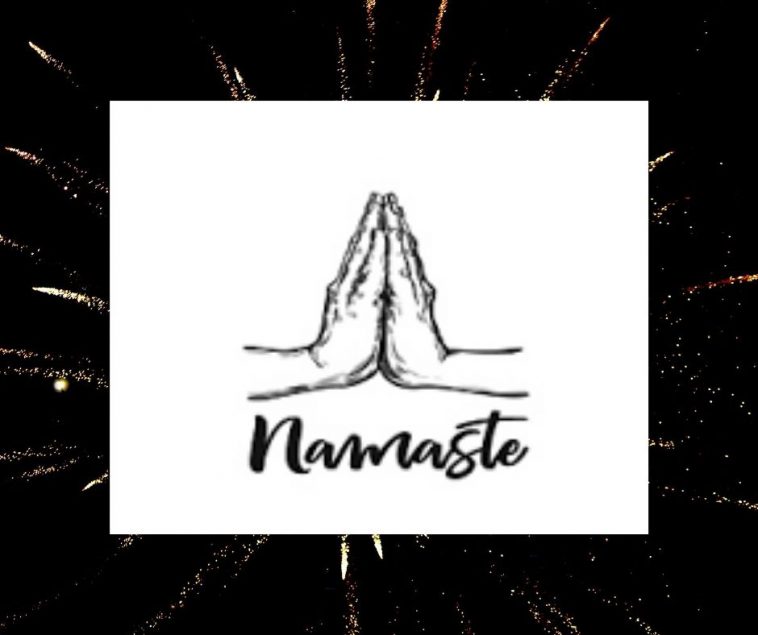 Namaste is a Sanskrit word and means “I bow to you.” ‘Nama’ means ‘bow’, ‘as’ means ‘I’, and ‘te’ means ‘you’ – together they add up to ‘I bow to you’. It’s an Indian form of greeting conveying respect and reverence, traditionally followed since ancient time. Namaste, also known as “Anjali Mudra” (prayer position for hands), is widely practised by people when they meet friends, family and significant others as a form of greeting with joined hands and heads bowed in respect of each other.

Namaste is a recognition that all are equal and the understanding of the basic reality of human existence. The essence of namaste is the presence of a divine spark, which exists in each one of us in the heart chakra. Cultural aspect of namaste is rooted in the belief that our souls have the same origin, and the gesture is an acknowledgement of one soul by another soul.

Namaste has a deep spiritual teaching encapsulating the ideal that all are one. All human beings are made from the same material, but on the surface people appear different. According to Tantrik philosophy, everything in this universe has existence to a divine consciousness, which desires to experience varied forms of the self. Humans have the inherent nature of forgetting the divine truth -that each individual, their thoughts, feelings and experiences are an expression of the oneness. And when humans forget this divine reality, they suffer. Spiritual teachings of namaste is simply an act of remembering who we truly are.

Yoga classes have adopted namaste as an important part of the yogic kriya. Most yoga classes are ended with a namaste by the yoga teacher. The teacher says namaste symbolizing gratitude and respect to the students, and to his/her teacher(s). It’s also an invitation to students to connect to their own heredity and acknowledge the divine truth that all are one in heart and spirit. Namaste connects the teacher and student in a timeless bond which is free from ego. The gesture of namaste sends peaceful spirituality to the universe with a hope of receiving positive vibes. Most people just say namaste to thank the teacher for the knowledge imparted during the class.

How to respond to Namaste

Namaste is performed by placing the palms together against each other, in front of the chest. The tip of all ten fingers should touch each other. While greeting bring the hands to the heart chakra, close the eyes and say namaste with a slight bow of the head. Bringing the hands to the heart chakra is believed to enhance Divine love. While the bowing of head and the closed eyes helps the mind in surrendering to the Divine being in the heart. Namaste is an expression of profound respect to another being. In the west people who practice namaste perform the gesture and say the word “namaste” in conjunction. In India, where namaste is widely practised in most households, the gesture itself means “namaste” and sometimes people don’t utter the salutation word.

Namaste brings two individuals together energetically in a strong infinite bond. The gesture can result in deep spiritual unity when performed with deep feeling and surrendering of the heart and mind.